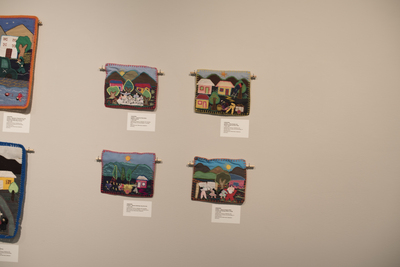 In 1973, the democratically-elected Socialist government of Salvador Allende was forced out of power in a coup led by General Augusto Pinochet. The coup was condoned by the United States, who feared Soviet influence so close to their borders. Under Pinochet's military dictatorship, people suspected of anti-government activities were routinely seized from their homes and disappeared.

Poor women, whose husbands, sons, brothers, or fathers were disappeared would meet each week at arpillera workshops in Santiago, where they would support each other, and create these fiber works that told the outside world about their hunger, fear, unemployment, about housing shortages, and about the disappeared. These arpilleras bore witness to the events unfolding in Chile under Pinochet, and served to document and denounce oppression in a country where all other modes of expression were closed. These first workshops were organized under the Vicaria de la Solidaridad (Vicariate of Solidarity), an ecumenical human rights group under the umbrella of the Roman Catholic Church of Santiago, who then smuggled them out of the country in diplomatic pouches. The arpilleras not only told the story of an increasingly-critical political situation, but also were sold to support the women creating the arpilleras in the workshops.

As arpilleras became more popular on the international market, other groups thought that those made under the workshops of the Vicaria were not forthright enough about the horrors under Pinochet (the Vicaria banned explicitly political themes or depictions of violence), so other workshops emerged, creating arpilleras that were more explicit, detailing the atrocities committed by Pinochet's military government.

As the market grew, so did awareness of the propaganda power of these arpilleras on the international market. As a result, Pinochet's government created its own workshops to produce arpilleras that depicted a fecund and peaceful Chile.